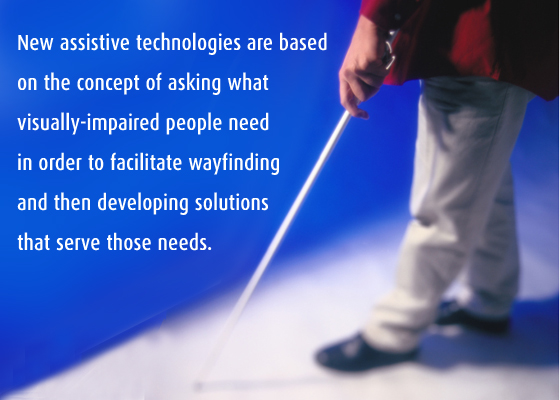 Sonic technology can be incorporated into devices that blind or visually-impaired people either hold in their hands or wear on their heads. Microcomputers coordinate a pulse-echo system for these devices. Transmitters send out sonic energy along the desired path, and this energy bounces off objects on the path. The resulting echoes are detected by receivers and processed by a microcomputer on the device to deliver auditory information to the user through headphones.

Another way to help blind or visually-impaired people navigate built environments is through the use of radio-frequency identification (RFID) tags. These tags can be placed at strategic points in a facility, and blind or visually-impaired people would use hand held receivers to scan the tags and receive auditory messages about their current location relative to the spatial dimensions of the facility. Since more and more people are using smartphones, apps could be developed to serve the same functions as hand held receivers.

Wayfinding technology can also include architectural solutions in built environments such as textured paths. By feeling changes in texture underneath their feet, blind or visually-impaired people can utilize these paths to find their way to destinations in a given facility. Textured paths can be created using a combination of ridges and plateaus. Ridges could provide directional cues, while plateaus – a temporary absence of ridges – could help with orientation. In the digital age, there are all kinds of promising possibilities when it comes to developing wayfinding technology for visually-impaired people. Technology is becoming increasingly interactive, and it’s that interactivity that’s most needed to assist blind or visually-impaired people in safely navigating built environments. No doubt there’ll continue to be more and more intriguing, high-tech solutions developed to serve the needs of the visually-impaired.

Wayfinding and Navigation: What’s the Difference?

Wayfinding and navigation are related concepts, but they aren't exactly[...]

We wanted to recognize and congratulate ASI, Detroit for landing[...]

Converting the Science of Wayfinding into Practical Art

On the surface, facilitating the movement of people from one[...]