“I thought the  ADA mandates a minimum 70% contrast level for signage, but I don’t see this percentage noted in the new ADA standards. Where is it?”

This is a great question because it represents a common misconception regarding ADA signage guidelines. In fact, following is the exact verbiage from the 2010 ADA Standards for Accessible Design pertaining to signage contrast:

“Characters and their background shall have a non-glare finish.”

Even in the “old” 1991 ADA guidelines, 70% minimum contrast was referenced as a recommendation only and not a requirement.  To date, we have seen no reference to the 70% recommendation in the “new” 2010 ADA standards; however, per the above contrast guidelines, contrast is still seen as an important consideration in designing and manufacturing ADA signage. 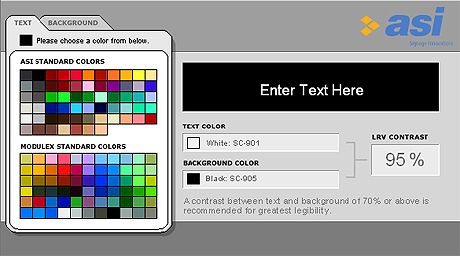 And given that contrast is and will always be a critical ingredient of functional ADA signage, it makes perfect sense to continue applying the quantifiable 70% minimum contrast rule-of-thumb to properly gauge signage contrast. Taking this approach while understanding the contrast requirements in the 2010 ADA standards will help to ensure that sight impaired individuals can effectively read the sign information and comfortably navigate toward their desired destination.

The U.S. Department of Justice regularly provides a status report[...]

Have you ever wondered how ADA signs are made from[...]