One would think that the average patient would choose a hospital based primarily on its clinical quality, i.e., the quality of its care, particularly with regard to the condition or illness that a person may be suffering from and for which he or she requires hospitalization. According to a recent article in the December 2, 2010, issue of the New England Journal of Medicine, however, a hospital’s amenities may actually be just as important – if not more so – to a patient when deciding where to obtain care. Indeed, the authors note that “[p]atients themselves said that the nonclinical experience is twice as important as the clinical reputation in making hospital choices.” [emphasis added] They further point out that, although “improvements in amenities cost hospitals more than improvements in the quality of care, […] improved amenities have a greater effect on hospital volume.”

Amenities such as massage therapy and lobbies that rival those of “five-star hotels” are becoming increasingly popular among hospitals as administrators become sensitive to patient feedback in a fiercely competitive healthcare environment. However, in the race to become the Club Med of healthcare, one shouldn’t overlook one of the most underutilized and underappreciated tools to enhance the patient experience: wayfinding.

Wayfinding isn’t just about signs. In fact, signage is simply the result of a wayfinding system. Hospitals are already inherently stressful and confusing environments to begin with. No amount of espresso machines and gourmet dining choices can overcome the disorientation and frustration that stems from a patient’s or visitor’s inability to locate their destination, particularly during an emergency or otherwise critical situation. 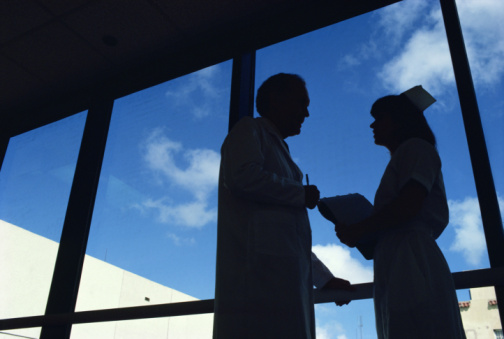 As hospitals augment their facilities to include more desirable amenities, they must also consider how their wayfinding and signage networks can further enhance the positive physical and psychological effects of these new additions. For example, carefully chosen artwork can not only alleviate stress among patients, they can also serve as thematic approaches to different functions or even floors within a building. Design elements such as lighting and materials can both improve the visual appeal of a hospital as well as create clear landmarks and intuitive pathways. Large, well-placed windows can let in natural light and also allow patients and visitors to orient themselves in relation to exterior landmarks. 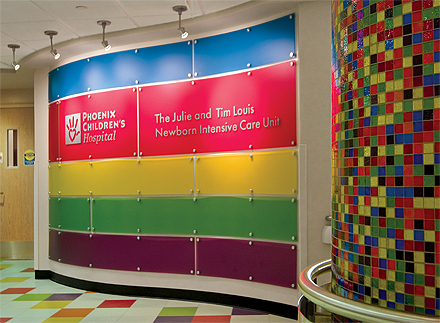 And of course, signage needn’t simply boring and utilitarian; as many forward-thinking hospitals and clinics can attest, signage can even be visually arresting and welcoming at the same time that they’re silently guiding people through the maze of most modern hospitals. Take a look at wayfinding signage for Phoenix Children’s Hospital and the case study of the NICU unit donor recognition signage.

As we’ve pointed out in this blog before, the purpose of hospital wayfinding isn’t simply about directing someone from Point A to Point B, or from the lobby to the maternity ward. Rather, it’s about improving the quality of the healthcare experience for patients and visitors from the moment they arrive. Whether or not the trend towards expansion of nonclinical hospital amenities continues – particularly with the passage of the Patient Protection and Affordable Care Act – remains to be seen, but what’s clear is that hospital wayfinding is a necessity, not a mere cosmetic enhancement.

Communicating with the Functionally Illiterate in Public Spaces

According to a recent report published by the National Institute[...]

Combine Fun and Functionality into Wayfinding Signage Solutions for Zoos

A visit to a zoo can be both educational and[...]

We have talked a lot about what it takes to[...]