Wayfinding Signage for the Illiterate and Low-Literate

Home ada signageWayfinding Signage for the Illiterate and Low-Literate

Wayfinding Signage for the Illiterate and Low-Literate 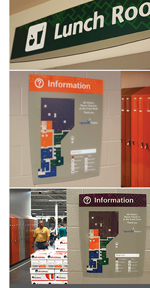 In previous posts, we addressed the latest in wayfinding for underserved populations, namely those with low levels of English proficiency (“LEP,” or limited English proficiency). Another frequently overlooked but equally important group, however, include individuals of low literacy and how their needs can impact wayfinding signage. According to the 2003 National Assessment of Adult Literacy, approximately 14% of Americans (representing about 30 million people) scored Below Basic in Prose Literacy, meaning that they possessed “no more than the most simple and concrete literacy skills.”

Another 29% (or 63 million Americans) were scored as Basic, meaning that they “can perform simple and everyday literacy activities.” Of course, some of the survey respondents also met the standards for LEP, so they may very well be literate in their own native tongue, but the data is clear that a significant percentage of even the native population have only the most limited literacy skills, and many are unable to read or write at all. Healthcare administrators and staff understand that hospitals themselves are intimidating enough without introducing the complexity of navigation into the mix. Far too many modern hospitals represent tremendous challenges to
both new visitors and even their own staff who are trying to locate themselves and their destinations in the vast, sprawling campuses of today’s healthcare facilities. Good wayfinding techniques which take into consideration not only where the “key decision points” are but the ability of the average person to decipher the choices presented to her and quickly make the best one as defined by her need, are often forgotten in the wake of mergers, acquisitions and construction projects.

As with LEP patients and visitors, hospitals are increasingly recognizing the need to make their facilities friendlier and more welcoming to illiterate visitors and patients. Some medical staff are independently taking it upon themselves to assist individual patients by changing the way they approach each medical visit, from rephrasing their questions to screen for literacy issues to providing aids such as videos and color-coded medication schedules.

Getting people through the door initially, however, is the first major hurdle, one that many illiterate and low-literate patients have a difficult time overcoming. One study found that “[p]articipants […] often mentioned problems finding their way in hospitals. This is not surprising considering that clinics and other health care sites may be marked with unfamiliar and difficult-to-read words such as ‘Gastroenterology’ and ‘Radiology.’”

Hospitals are taking certain steps to address it, with the push for greater adoption of the universal healthcare symbols recently unveiled by the Robert Wood Johnson Foundation and Hablamos Juntos a great start. Other wayfinding options include interior and exterior digital signage, which can be updated as often as necessary and can include both audio as well as video; touchscreen kiosks; and even pre-recorded PA messages similar to what you hear at airports and train stations. Museums, zoos, and other educational institutions already make full use of these technologies to better assist their visitors and guests, and hospitals are slowly beginning to incorporate them into their own interior and exterior architecture and design.

Hey There, What’s Your Sign? Why Signage is Important to Your Business

A posting on The Velvet Principle blog titled "Do Digital[...]

In years past, the most a person who provided a[...]